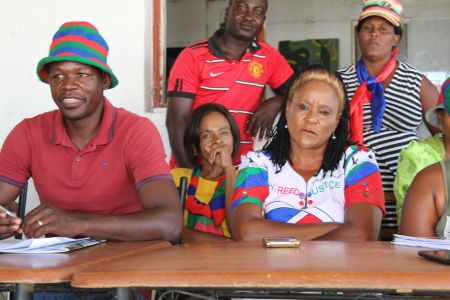 A group of disgruntled Swapo members who are residents of Okahandja has come out guns blazing, calling for the removal of incumbent town mayor, Johannes Hindjou.
The group are accusing Hindjou of being corrupt, saying he can no longer be entrusted with mayoral duties.
They called on Swapo Secretary-General, Sophia Shaningwa to remove him with immediate effect, otherwise they will camp at the municipal offices in protest until their demand is met.
Hindjou stands accused of contravening the Public Procurement Act of 2015, for allegedly awarding cleaning tenders to acquaintances in the town.
Those contracts have since been terminated by the town’s chief executive officer, Martha Mutilifa, documents in Nampa’s possession show.
Hindjou is also accused of leasing land to business owners, despite there being a moratorium against land sales or leasing in the ‘Garden Town’.
The former footballer is also implicated in using his official work car and petrol card for private purposes.
“We don’t have a problem with Hindjou as a person, we have a problem with corruption. We have a problem with him serving (as mayor) on the party’s ticket and this corruption that he is involved in,” Hidipohamba Vatilifa, the group’s spokesperson told this news agency in an interview Tuesday.
Vatilifa did not provide this agency with documents to support these allegations.
On his part, Hindjou rubbished the allegations and called on his accusers to approach the courts.
“These allegations must be submitted with evidence. These people just want to tarnish the name of Congo Hindjou but I built my name under very difficult circumstances to where I am today,” he said.
Hindjou is willing to face them in court.
The Vatilifa-led group wants Shaningwa’s directive on her preferred changes that should be effected to the party’s office bearers, to be implemented as is.
Last month, Shaningwa instructed Swapo’s Coordinator for the Otjozondjupa Region, Susan Hikopua to effect changes to the party’s local authority office bearers in Okahandja.
Shaningwa wants Sofia Uupithe to be elected as mayor, which is now a bone of contention amongst councillors and residents alike.
The group believes the changes Shaningwa wants are in good faith and therefore in the town’s best interest.
Last week, Swapo’s Okahandja District Executive Committee (DEC) stood by Hindjou, saying he should retain his mayoral post.
The DEC, as empowered by Swapo constitution’s Rule 64, should effect changes to municipal council, and not Shaningwa, they argued.
“People can come up with their directives left, right and centre but they can play the ball (vote for their preferred candidates) in the chamber as provided for by the Local Authorities Act,” Issaskar Katuuo, a DEC member said, in retaliation to Shaningwa’s directive.
When called for comment on the way forward on Tuesday, Shaningwa said: “That matter is no longer with my office. It is with their office (DEC).”
(NAMPA)