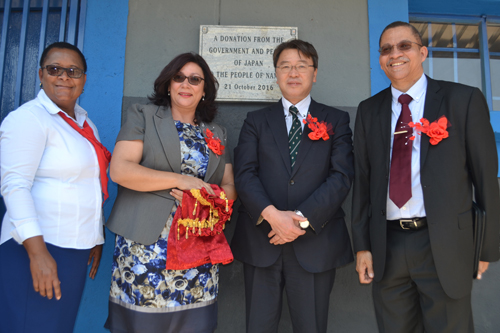 The Ministry of Education, Arts and Culture has made firm efforts to elevate about 10 primary schools, particularly in the Khomas Region, out of the dreaded double-shift system of education that has been tremendously straining not only learners but also parents.

Learners usually directly affected by this system are in Grades 2 to 5 and are on average between the ages of seven to 10 years of age.

Steenkamp made the remarks when she received four classrooms, a storeroom, 16-bay carport and roofed superstructure donated by the Embassy of Japan and a drinking fountain constructed through contributions from parents and guardians at Hillside Primary School.

“I spoke to some teachers who said the double-shift system had been a tremendous challenge, not only on teachers, but also on parents and learners. Can you imagine the uncertainty of parents whether their children are safe? We will make sure no child will be exposed to afternoon classes, that’s why we appeal to you (Good Samaritans) to have 10 more schools out of afternoon classes,” she remarked.

The Ambassador of Japan to Namibia, Hideyuki Sakamoto, who handed over the infrastructure, said the total contribution from Japan amounts to over N$1 million. He noted that the completion of the project not only emphasizes the continuously strengthening bilateral relations between Japan and Namibia but also highlights Japan’s commitment to contributing towards development and to the nation building of Namibia.

Hillside Primary School is the 29th school that has benefited from Japanese government support throughout Namibia since 1997.

“The government of Japan decided to provide this assistance in order to respond to the growing need of educational opportunities in the Greenwell Matongo informal settlement where the population is rapidly and continuously growing, hence lack of space in schools becomes a serious challenge,” Sakamoto said.

Steenkamp said at Hillside Primary School, Grade 3 learners will be elevated to the morning session following the inauguration ceremony and the school will then be rid completely of the double-shift system.

According to her, once a school has emerged from the dreaded double-shift system all efforts must be made to ensue that it does not recede into it ever again.

The PS explained that over the years, the system became further entrenched as a result of the influx of citizens into the Khomas Region and other regions that are prominent growth pivots for employment and opportunities.

This, she said, led to primary school facilities being used maximally to accommodate learners.

Unfortunately, Steenkamp said these subjects have to be taught after commencement of the afternoon session, saying this is not a conducive time to teach primary school learners where learning must be repeated until it becomes established in the young minds.