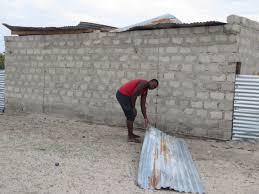 The roofs of several occupied houses built under the national Mass Housing Programme in Rundu were on Monday blown off by strong winds and heavy rains.
The downpour also caused damage to other unoccupied houses and several buildings of the University of Namibia (UNAM) Rundu Campus.
Veronika Kalimbwe, a resident whose house was destroyed, told Nampa on Tuesday she was saddened by the situation as her hope was to have a house of her own.
But now it seems the house was constructed with low-quality materials, she said, adding that some of her belongings, especially electrical appliances, are not working due to the rainwater.
Kalimbwe said what made the situation worse was that no one, including the contractor responsible for the construction of the houses, have come to the aid of those whose property was destroyed.
I need help, at least to put the roof back, but no one has come to my rescue, everything is left to me, she said.
The N.dollars 3 billion Mass Housing initiative, launched by former President Hifikepunye Pohamba for the construction of affordable houses, was placed under the National Housing Enterprises (NHE) in 2013.
However, in 2015, the project was moved to the Ministry of Urban and Rural Development (MURD) following a Cabinet directive to strip the NHE from this mandate.
Contacted for comment on the damages, MURD Permanent Secretary, Daniel Nghidinwa said the ministry will investigate the matter to see if the wind was extraordinary or if the damage occurred because of defects on the houses.
In the case of the latter, the contractor will be taken to task, he said.
We will hold whoever is responsible for that work accountable if it is determined that it is the contractor who is responsible, Nghidinwa said.
(NAMPA)