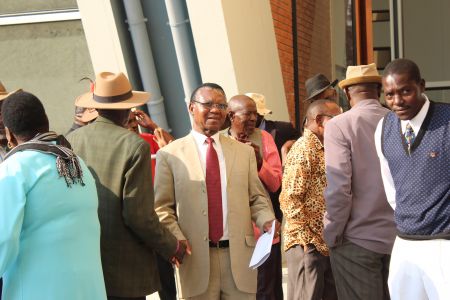 The Oshakati High Court on Thursday ordered Ondonga leader, Omukwaaniilwa Kauluma Elifas, to be brought to court within 14 days to testify that he indeed dismissed seven of his traditional councillors.
The dismissed councillors in question are Peter Kauluma, Joseph Asino, Vilho Kamanya, John Walenga, Kashona kaMalulu, Fillemon Nambili and Tonata Ngulu.
The seven were last year issued with letters of dismissal on charges of misconduct, but have refuted the authenticity of these letters, arguing that they were not really issued by Elifas and that the signature on the letters is not his.
During the first hearing of their case in the Oshakati High Court last month, the councillors, through their lawyer, George Coleman demanded that Elifas be called to court to testify.
Judge Maphios Cheda in his verdict on Thursday confirmed that the application for Elifas to give oral evidence on the issue of his decisions regarding suspension, dismissal of applicants and their replacement had been granted.
Coleman and Elia Shikongo, who heads Elifas defence, are now expected to set a date when the traditional leader will appear, within the prescribed 14 days.
Elifas and his newly appointed councillors, Erastus Mvula, Paavo Amwele, Rainhold Nepolo, Fillemon Kambala and Nepando Amupanda, have also been ordered to pay legal costs of the dismissed councillors.
Approached for comment, Elifas spokesperson, Naeman Amalwa on Thursday told Nampa that the Ondonga Traditional Authority is already filing its appeal with the Supreme Court against Cheda's decision for Elifas to be brought to testify in court.
Such decision has shocked the entire Ondonga community and we will not allow our elderly Omukwaniilwa (king) of 84 years, to be carried to court, Amalwa replied.
Amalwa further said that the Ondonga community members following the dismissed councillors, should bear in mind that they are behind the rebels.
(NAMPA)