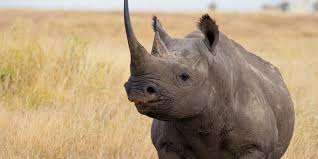 Ministry of Environment and Tourism (MET) officials on Wednesday captured the black rhino that had been frightening villagers at Uukwiyuushona Constituency in the Oshana Region.
The capture was confirmed by MET spokesperson, Romeo Muyunda in a telephonic interview with Nampa on Wednesday evening. The rhino in question is one of two rhinos believed to have escaped from the Etosha National Park, seeking water and greener pastures.
“The capture team has already taken it (rhino) back to the park and the idea was to capture also the second rhino and take it back to the park,” stated Muyunda.
An aggressive lion, also believed to has escaped from the park, also terrorised villagers at Uulunga Wakolonde in the same area a week ago before it was put down by a joint search team comprised of MET and Namibian Police Force officials.
According to Muyunda, the imminent drought condition Namibia is faced with is forcing wild animals to escape from the Etosha National Park.
As a result, the northern regions of Oshana, Omusati and Oshikoto have experienced stray wild animals such as zebras, wildebeest, springbok and lions over the past few weeks.
(NAMPA)