Home >Blogs >admin's blog >African Stars advance to the finals of the #Debmarinenamibiacup18 , following a 2-1 victory over Civics.

African Stars advance to the finals of the #Debmarinenamibiacup18 , following a 2-1 victory over Civics. 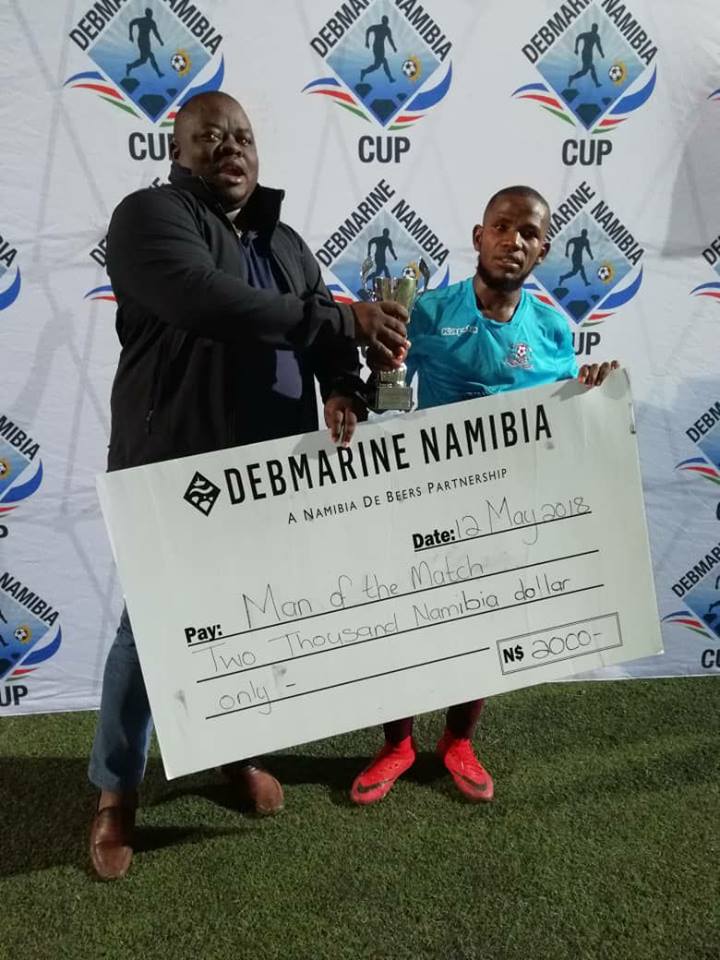 THE Debmarine Namibia Cup final will be “an excellent” showdown between Ronnie Kanalelo's “work in progress” against Bobby Samaria's seasoned campaigners after Unam and African Stars saw off Black Africa and Civics in engrossing semi-finals on Saturday.

Unam's largely novice side held their nerve to edge BA 5-3 in a penalty shoot-out, following a one-all draw after extra time to reach a landmark maiden FA Cup final set for 19 May at a yet to be determined venue.

Stars, meanwhile, avoided the lottery of spot kicks through a dramatic match-winning goal from midfield stalwart Ronald Ketjijere with just two minutes of extra-time left to see them through 2-1 to the final.

His captain, Pat Nevin Uanivi, was glad to see the back of the gung-ho Civilians who refused to go quietly in the end-to-end encounter.

Veteran winger Edwin Korukuve pounced on a defensive mistake to fire Stars ahead from close range eight minutes into the second half, only for industrious forward Ngunzu Salazar to equalise after 75 minutes and send the match into extra-time.

“It was the kind of game we expected. Civics have been giving us trouble for some time now. They are a good team, very young, and they run a lot,” said Uanivi.

“But we were not worried at all. We controlled the game, even though they gave us some tough work on the counter.

“We have a very good team. We've had a good season; have been together for long now. We'll sit down and take stock of today's game, and work on the game plan for the final,” he added.

Stars are chasing their first Namibia Premier League and FA Cup double since managing the feat back in 2010 under Samaria.

Four members – Uanivi, Ketjijere, Korukuve, and Dennis Tjetjinda – from that all-conquering team, which also went on to play in the Caf Champions League the following season remain, and are keen on a repeat.

“I was in that team. It was super-nice to win [the league and cup double in 2010], and we want to do it again. Hopefully, the double can happen again,” said Uanivi.

Standing between them and another clean sweep is a Unam team brimming with young talent, and who have disrupted the establishment in their second season in the top flight.

“I think it's going to be an excellent final against Unam. They also had a good season, so we are looking forward to the battle.”

While seasoned Starlile already have the NPL title in their trophy cabinet, Kanalelo's charges have had a particularly rewarding season in their own right.

On Saturday, they showed character when coming back from a goal down, when BA substitute McCartney Naweseb scored just after half-time, to equalise through well-travelled forward Tara Katupose before winning the hard-fought match on penalties.

“It's a big day for Unam FC. It's a big opportunity for the club to play in the cup final. The two teams in the final are both going for the kill. The cup is a once-off thing and a bit of a lottery,” said Kanalelo, whose combustible personality was a misplaced pass or debatable refereeing call away from boiling over on the touchline at the sparsely attended match inside the Sam Nujoma Stadium.

Winning the second edition of the Debmarine Namibia Cup crown will not only send a statement of intent to their rivals for next season, but also amplify the club's rapid progress under the former Brave Warriors goalkeeper.

“We ended fourth this season. The target from the beginning was to end in the top five. In my first season, we were 10th with 35 points, and this time around we are fourth with 13 points more.

To challenge for the league title, we need to be stronger defensively. But overall, I'm happy with our achievements so far, and look forward to the final,” said Kanalelo. “Looking at my players, they are still raw. For most of them, they are first-timers in the premier league as they come from the first division.

“Most of them are still pretty young. But I must say they have done well so far tactically. We still have a long way to go. It's still a work in progress, so we'll continue working.”