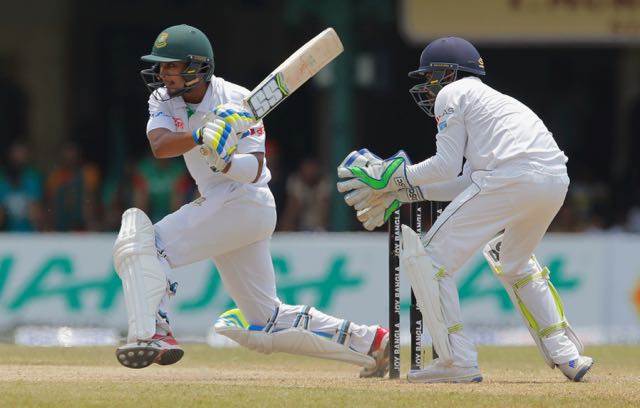 COLOMBO - Opener Tamim Iqbal top-scored with 82 as Bangladesh pulled off a historic four-wicket win over Sri Lanka in the second Test in Colombo on Sunday.
The rare win for Bangladesh - just their fourth away from home and first against Sri Lanka in 18 attempts - meant the two-Test series was drawn after the visitors suffered a 259-run loss in Galle.

Bangladesh Prime Minister Sheikh Hasina phoned the team to congratulate them as hundreds of fans marched through the capital Dhaka, waving flags and chanting in celebration.

With his team chasing a victory target of 191, teenager Mehedi Hasan hit the winning run after an anxious half-hour in the final session of the fifth day - getting Bangladesh across the line in 57.5 overs.

Tamim laid the groundwork with his 22nd Test fifty, teaming up with Sabbir Rahman (41) for a third-wicket partnership of 109.

Sri Lanka struck in phases through spinners Dilruwan Perera and skipper Rangana Herath, who grabbed three wickets each. But the attack lacked the cutting edge to prevent Bangladesh from celebrating their 100th Test match in style.

Bangladesh began looking nervous when Tamim - who faced 82 balls and hit seven fours and a six - hoisted a catch to Dinesh Chandimal off Perera just before the tea break.

Perera then removed Sabbir through a successful review after the bowler's initial appeal for a leg-before was rejected, giving Sri Lanka an outside chance of victory.