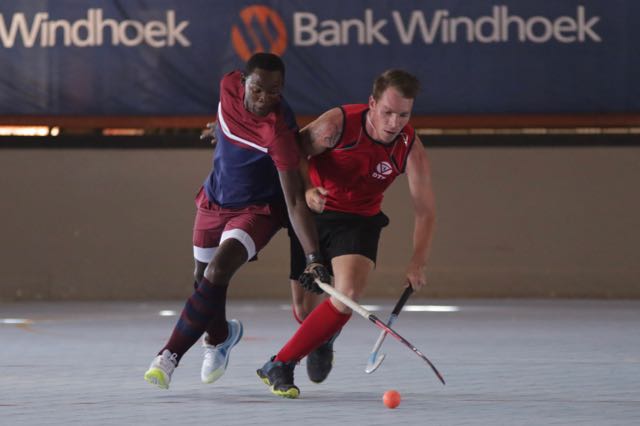 WINDHOEK Old Boys A scored a stunning last-minute victory against DTS to maintain their unbeaten status in the Indoor Hockey Men's Premier League on Saturday.
WOB A seemed to be heading for their first defeat of the season when DTS led 3-2 with a minute left to play.

Bucko Bartlett, however, struck with two goals in quick succession to complete his hat trick and leave DTS devastated and wondering what had hit them at the final whistle.

In a top quality match, DTS put in a great performance against the defending champions, and took an early lead through a field goal by Billy Beukes.

Bartlett equalized for WOB, who upped the tempo, but DTS keeper DJ Strauss pulled off some great saves to keep them at bay.

Just before halftime, however, Ettienne de Villers scored from a Pieter le Roux counter-attack to give WOB a 2-1 lead at the break.

DTS equalized early in the second half when Jason Bolton nipped in to steer a loose ball into the net, and DTS regained the lead when Percy Barthram scored from a short corner midway through the second half.

DTS kept on attacking, but some fine saves by WOB keeper Jacobus Coetzee kept them out, before WOB struck in the final minute.

Siabonga Martins created both goals, while Bartlett finished them off with precision.

DTS later beat WOB B 3-0, but WOB A thrashed NUST 18-0 to go to the top of the log on 27 points from seven matches, while DTS are second on 26 from nine matches.

Against NUST, Bartlett led the way with six goals, while Siabonga Martins and Etienne de Villiers scored three goals each, Pieter le Roux and Dylan Alexander two goals each, and Nico Jacobs and Sean McCulloch one goal each.