Home >Blogs >admin's blog >Boxing goes back to its roots

Boxing goes back to its roots 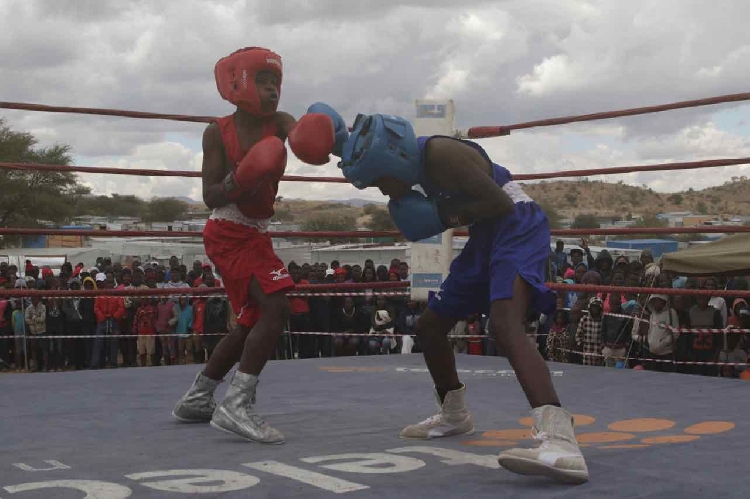 Rebelo Doeseb of the After Care School Centre (left) beat Elifas Imene in a junior fight.

THE Samora Machel informal settlement in the Goreangab area of Katutura was the scene for a boxing development tournament organised by the Khomas Boxing Federation (KBF) on Saturday.

Fighting in an open-air ring on a clear patch of land between rickety shacks against the backdrop of the sprawling Khomas Hochland mountains, some of Namibia's finest young talents slugged it out in front of an enthusiastic crowd of more than 500 people.

Eight clubs from Khomas, as well as Swakopmund Boxing Club, competed at the tournament which saw a total of 14 juniors and 44 senior boxers in action.

The chairman of the KBF, Jason Naule, said they had decided to hold their tournaments in the informal areas, since it was more popular.

“In the past, when we held tournaments at places like the UN Plaza or Zoo Park in the centre of town, we drew very few spectators. We also did some research and found that most of our young boxers come from the informal settlements, so the support base there is strong,” he added.

With sponsorships hard to come by, the KBF has enlisted the help of community vendors and small business enterprises, while the community councillors also play an important role, according to Naule.

“Before we hold an event we go to the community councillor to get his support. He then informs the local community, while we also go and canvas support and sponsorships from the local vendors and SME's,” he said.

Naule thanked the councillor for the Samora Machel constituency, Fanuel Shivute, who was present throughout the tournament, for his support.

“Councillor Shivute played a big role in the success of this tournament. He supported it from the start and sensitised his people, so we really want to thank him for mobilising his community,” he said.

The event was so popular, in fact, that community members already requested that another tournament be held at the same venue, but Naule said they would need financial support to realise that goal.

“The turnout was very good and they already requested that we hold it there again, but for that to happen we need support with the logistics and sponsorships to hold the tournaments. If we get that we can hold tournaments each weekend. Our expenses are not that much - we need transport and manpower to set up the ring and then we also need a generator to provide electricity for the PA system,” he said.

Naule said they had big plans to develop boxing in the Khomas area, but needed sponsorships to reach their targets.

“Our plan is to go to all the informal settlements in the Khomas area. If they request it, we will go, we will just need to get approval and support from the community councillor,” he said.

“Our main wish is to get a sponsor who can help us draw up a year plan, so that we don't need to run around looking for sponsors for each event,” he said.

One of the talented youngsters who was in action was Hafeni Joseph of the Mistake Boxing Academy, who is also a member of the national youth team that will compete at the Africa Youth Games in Algeria this month.

He gave a fine technical display to beat Eric Shitana of Swakopmund 2-1, while other youngsters who impressed included Richard Hubertus, Johannes Gideon, Johannes Amunyela and Hubertus Doeseb of the After Care School Centre; Godfried Mandele of Salut Boxing Academy and Joy Nangolo of Swakopmund.