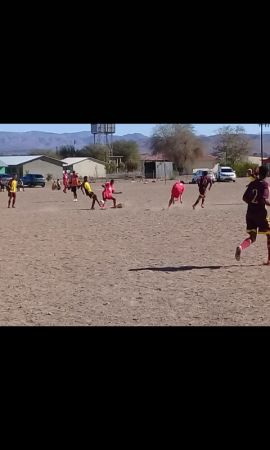 Brazilie Football Club collected four points in their ||Kharas Second Division Inland Stream matches played over the weekend at the Noordoewer Stadium.
Zilles, as Brazilie is also known, played to a 2-all draw against Orange Rangers on Saturday after conceding two late penalties having led 2-0, and on Sunday defeated Spiders 2-0.
The four points collected lifted Zilles to 23 points and third on the log.
Zilles Team Manager, Emrico Blaauw told Nampa on Monday they are happy with the four points.
The games were not easy, especially on Saturday against Orange Rangers when we conceded two late penalties. On Sunday, we regrouped and collected three points in the quest for a top-two finish, he said.
In other Inland Stream matches played at the weekend, log leaders Dates Eleven collected maximum points to stretch their lead at the top of the log to seven points.
Bennie Charly, Julius Rooi and Ella Bloodstaan scored in the 3-0 win against King Pele Santos on Saturday, while Edward Rooi, Denzil Pieters and Merril Jossop scored in the win against Tornados at the Karasburg Combined School Stadium on Sunday.
The full results of Week 7 matches in the Inland Stream: