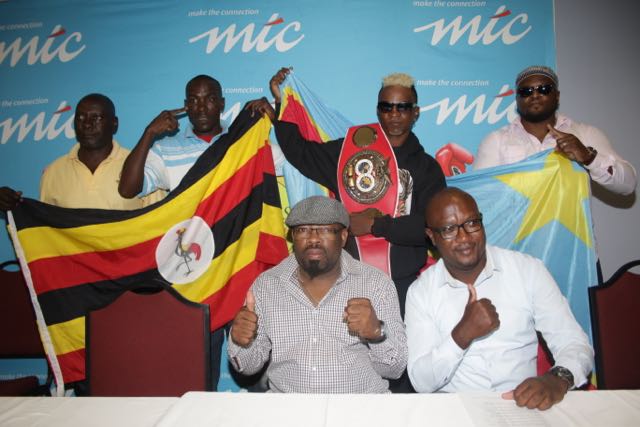 THE countdown to Saturday's Independence Boxing Bonanza at Ramatex began in earnest on Tuesday when the main foreign challengers promised to spoil the Namibian party and take the titles back home with them.
At a press conference in Windhoek, Benoit Vela of the DRC who will challenge Paulus Moses for the WBO Africa lightweight title, and Med Sebyala of Uganda, who will challenge Walter Kautondokwa for the WBO Africa middleweight title, both appeared confident and determined to win their fights.

Speaking through a translator, the French-speaking Vela was the more talkative and boastful, and didn't mince his words:

“I want to call on all boxing fans as well as DRC compatriots to come and support me. Even the Namibian supporters will support me when they see what I can do in the ring,” he added.

The 30-year-old Vela is still unbeaten after 13 professional fights, with a record of 12 wins (six by knock out) and one draw. In his last fight six months ago, he beat compatriot Jonas Segu on a unanimous points decision over 12 rounds to win the vacant IBF Africa super lightweight title.

All his fights have been at home in the DRC, but he said he wasn't worried about fighting in Namibia.

“This is my second trip to Namibia, after I fought as an amateur at the AIBA Olympic qualifiers in Windhoek in 2008. I only know the Black Mamba in Namibia,” he said, referring to Namibia's former WBO Africa super middleweight champion, Willbeforce “Black Mamba” Shihepo.

Sebyala, the Ugandan middleweight champion, was more reserved, but equally confident of his abilities against the hard-hitting Kautondowka.

“I've come here to put up a hard fight and to take the WBO Africa belt back home. My people want this belt back home so I aim to do that,” he said.

The 37-year-old Sebyala doesn't have a very impressive record of 26 fights, 16 wins (13 by knockout), nine defeats and one draw, but most of those defeats came early in his career.

Since a points defeat to Daniel Wanwonyi of Kenya three and a half years ago, he won his next 10 fights in a row. He, however, lost his last fight against Wanik Awdijan of Germany a few weeks ago, on 11 March.

“I've fought many powerful boxers, so I've got the experience and I will beat him,” he said.

There will be a total of ten fights on the bill including two more African and Intercontinental title fights.

Tickets are available through Computicket and are going for N$50 for normal tickets and N$300 for VIP tickets.

“We made the tickets cheaper, because we want as many Namibians as possible to come and enjoy the boxing and celebrate Namibia's independence,” promoter Nestor Tobias said.