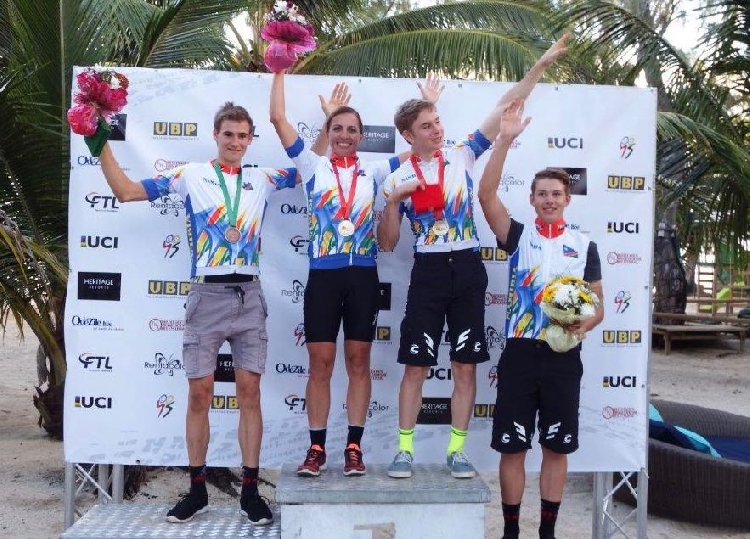 NAMIBIAN cyclists excelled to win two gold and one bronze medal at the African Continental Mountain Bike Championships in Mauritius over the weekend.
Michelle Vorster and Tristan de Lange each won gold in the Elite Women and u23 Men's categories, while Alex Miller won bronze in the Junior Men's category.

In the Elite Women's category, Vorster gave a brilliant performance to win the 20km event by more than two minutes.

Vorster took the lead from the start and at the end of the first lap had built up an 18-second lead over Aurelie Halbwachs of Mauritius.

She continued to pile on the pressure, and by the halfway stage was a minute and a half ahead.

Vorster eventually completed the 20km event in a time of one hour 23 minutes 55 seconds, finishing well ahead of Halbwachs who won silver in a time of 1:26:35, while Likeleli Masitise of Lesotho won bronze in 1:47:56.

It was the first time that Vorster had won gold at the continental championships and she was ecstatic with the achievement.

“Done It! Mauritius is Beautiful and comes with Gold! African Continental Mountain Bike Cross Country Championships - Elite Ladies African Champ,” she said on her Facebook page, adding, “So emotional - Thank you God for giving me this moment in my life, my husband for your unwavering support, Herman Davin and the Davin Sport Trust for making this all possible.”

Vorster also paid tribute to Namibian cyclists Costa Seibeb and Elroy Beukes who passed away over the past week.

“In memory of my late friend, Raul Costa Seibeb, who also wanted to be here and Elroy King Beukes who passed away while cycling in memory of Costa - bikes & smiles,” she said.

Alex Miller gave a fine performance to win a bronze medal in the Junior Men's category.

He stayed up with the leaders for most of the race and it was only over the final lap that he dropped back a bit to finish third in 1:09:03 - just 18 seconds behind the winner, Rossouw Bekker of South Africa, while another South African, Pieter du Toit came second in 1:08:52. Interestingly, all the medallists in the Junior Men's category posted faster times than the De Lange who won gold in the u23 category.

Namibia's Marcel Holtz also competed in the Junior Men's category but he failed to complete the race.

Alan Hatherly of South Africa won the gold medal in the Elite Men's category over 25km in a time of 1:20:18, while compatriot Stuart Marais came second in 1:23:03 and Yannick Lincoln of Mauritius third in 1:26:23.