Debmarine Cup Round of 16 draw 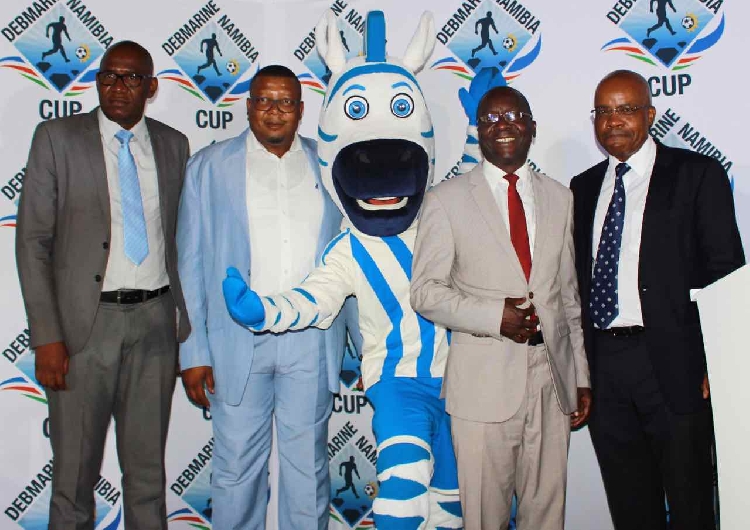 THE Debmarine Namibia Cup draw took place and the three first division and 13 second division team winners were joined by the 16 Namibia Premier League (NPL) clubs at this round of 32 draw. The Minister of Sport, Youth and National Service, Erastus Amutenya Uutoni was the guest of honour at this prestigious occasion.

In his address, Minister Uutoni expressed his gratitude towards Debmarine Namibia for their sponsorship and commitment towards the game of football. “As you all know – we have been faced with significant budget cuts for the past year and our savings endeavours will continue this year. Unfortunately, this means that we have to tighten the belt when it comes to our support of sport codes and many have experienced the cuts already. Trying to make do with less is never easy, and that is why we are grateful for any corporate and private company who jumps in to lessen our burden, while supporting worthwhile initiatives and projects in our country. And football – is definitely a worthwhile initiative.”

Uutoni emphasised that the government remained committed towards sport development. He added: “This has been entrenched in our latest NDP, where we express the desired outcome that Namibians have improved opportunities to participate in professional sports with employment contribution increasing from 0,2% in 2014 to 2% - and we voiced the hope that this could happen by 2022. This goal has not wavered at all as we realise that governments worldwide are increasingly adopting sport for development programmes to encourage social cohesion, integrate marginalised members of society, alleviate poverty, reduce substance abuse and crime and raise awareness of HIV and AIDS.”

Otto Shikongo, CEO of Debmarine Namibia compared the Debmarine Namibia Cup to diamond dreams, where the diamond starts off as a fairly rough stone and through polishing, training and encouragement, would morph into something beautiful and exceptional.

He said: “Through the sponsorship of the Debmarine Namibia Cup we aim at improving young Namibians through the popular sport of football – assisting in having their abilities recognised and polished and possibly leading towards winning teams or exceptional youngsters being discovered. From the outset we have said that our support of this football cup aimed at turning dreams into reality – especially for our youth. At Debmarine Namibia we believe that sport sponsorship nurtures socio-economic benefits for communities. As a corporate company we strive to ensure that we also act socially responsible. Empowering and uplifting our youth through sport is one way of doing this.”

The draw for the Round of 16 which takes place on 24 and 25 March is as follows: