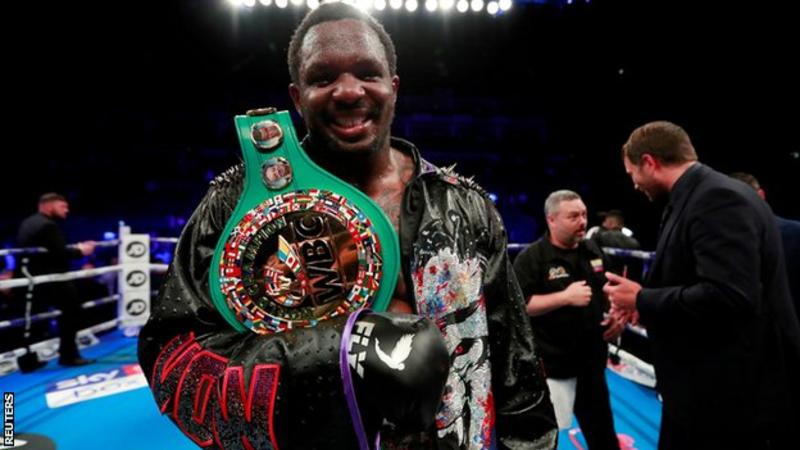 It comes after Whyte, 31, had a doping violation charge dropped.

In June, he had provided a sample that contained traces of a banned steroid, but UK Anti-Doping has withdrawn the charge as the levels were "very low".

Whyte could now fight the winner of Wilder versus Britain's Tyson Fury.

That contest is set to take place in February 2020 in America, with the WBC saying Whyte will fight for a world title for the first time "on or about February of 2021".

After Whyte defeated Oscar Rivas in July, it was revealed that an out-of-competition urine sample collected by Ukad a month earlier had yielded an adverse finding, although he passed all his tests with the Voluntary Anti-Doping Association (Vada) and had been allowed to fight.

The WBC then provisionally suspended Whyte, whose only professional defeat came in a non-title bout against Anthony Joshua in September 2015.

Earlier this month Ukad announced it was withdrawing its charge against Whyte, who gained a unanimous points win over Poland's Mariusz Wach on the undercard of Joshua's revenge win over Andy Ruiz Jr in Saudi Arabia on Saturday.

Mariusz Wach and Dillian Whyte
Dillian Whyte's win over Mariusz Wach in Saudi Arabia means the British fighter has won 27 of his 28 professional bouts
A WBC statement said: "Based on limited but detailed research and information gathering, including the WBC's consultation with two independent experts, the WBC found that there was no sufficient or conclusive evidence that Whyte intentionally, or even knowingly, ingested a banned substance with the purpose of enhancing his performance in any fashion.

"In light of the WBC's own finding and of Ukad's withdrawal of the claim against Mr Whyte, the WBC has closed its internal investigation.

"The WBC is hereby lifting its provisional suspension and confirming its recognition of Mr Whyte as WBC Interim world heavyweight champion."