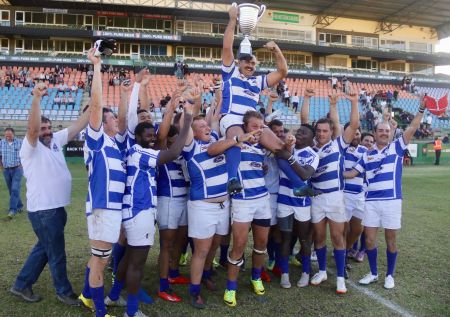 Grootfontein Rugby Club were on Saturday crowned champions of the Namibia Rugby Union (NRU) domestic league trophy after beating Keetmanshoop 34-17 in the final at the Hage Geingob Stadium.
To reach the final, the two teams had to overcome stiff competition from other opponents competing in the NRU domestic league in play-offs held at the Hage Geingob Stadium on 06 July and 13 July 2019.
In the final on Saturday Grootfontein showed character and determination leading the game from start to finish.
The two teams went on half time with a score of 23-10 in favour of Grootfontein who dominated the match despite Keetmanshoop having speedy players.
In the second half, the team from the Otjozondjupa Region capitalised on every opportunity they got and extended their lead from as early as four minutes into the half.
Keetmanshoop had little to show in the second half as they only managed to run in a solitary try, while their adversaries ran in one try, although not converted, and two penalties.
Lodewikus Jacob, Silvano Beukes, and Ironga Atshivudhi scored Grootfonteins tries, while Siegfried Potgieter converted two of the tries, while also scoring five penalties on the day.
Keetmanshoops tries meanwhile were scored by Wikus Swiegers and Shaun Farmer, with the latter also scoring both conversions and a solitary penalty.
Before the domestic league trophy final, Southern Bulls from Mariental clashed with Saint Lou from Rehoboth. The pair finished the game with a 20-20 score line after 80 minutes of play but Saint Lou won the match after scoring a try in their 20 minutes extra time, which was not converted, to give them a 25-20 victory.