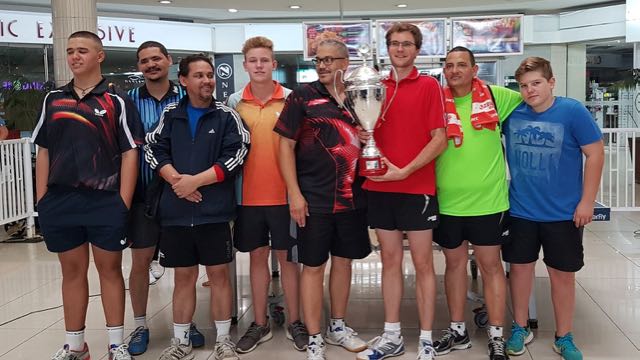 HEIKO Fleidl won the sixth annual Master's Cup, hosted by the Namibian Table Tennis Association (NTTA) in association with Wernhil Shopping Centre last Saturday.
Fleidl managed to outclass all of his rivals to win all seven his matches and claim the Master's Cup for the third time. He accumulated 16 out of a possible 21 championship points.

Runner-up, Dietrich Mowes finished a mere point behind the champion and at 17 is leading a new generation of exciting players.

The matches between Namibia's top eight ranked senior players had hundreds of people in Windhoek's Wernhil Shopping Centre following the action in amazement throughout the day. Most people stopped on their way through the mall to catch a glimpse of the five senior and three junior players in action.

“This tournament is always a test of sportsmanship and technique as the playing space is small and there is also the added hype from the crowd in the Wernhil Shopping Centre”, NTTA president Ramon Hansen said.

The Master's Cup is a promotional event, aimed at generating a bigger interest in the sport. The NTTA included a number of exhibition games to showcase table tennis and create awareness especially amongst prospective female players. NTTA's registered female players thus had the opportunity to display their talent and skills in front of a massive crowd at the shopping centre.