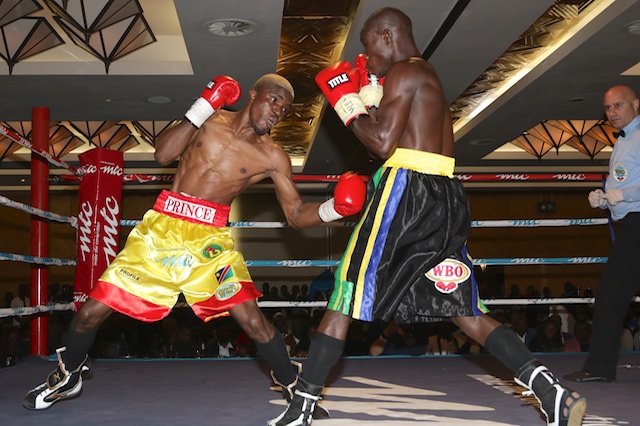 IMMANUEL 'Prince' Naidjala on Tuesday claimed he was used Down Under as a pawn to bump up Australian prospect Jason Moloney's record.

Naidjala implied there was a conspiracy to ensure that he lost the Commonwealth bantamweight title fight in Victoria, Australia, on Saturday after the referee's decision to end the contest one minute and 20 seconds into the third round, resulting in Moloney adding the vacant strap to his Oceania belt.

“From the weigh-in, they got scared because I looked bigger and taller than their boy. I knew it [fight] would not reach 12 rounds. Their plan was that whatever chance they got, they would stop the fight,” Naidjala told The Namibian Sport.

According to ringtv.com, Moloney (16-0, 13 knock-outs) used a smothering body assault to break down Naidjala (23-5-1, 13 KOs), before an overhand right and follow-up assault in the corner compelled the referee to stop the fight.

“I was hurting their boy. He got hurt in the second round, and he was not coming forward any more,” Naidjala contested.

“In the third round, we exchanged punches, and the referee stopped the fight. Yes, there was a punch that caught me, but it's not like I didn't know where I was. I was just protective of myself.

“It is not like he was throwing punches that were hurting me; he was hitting my gloves,” he explained.

“The referee said I was not responding, so he stopped the fight. How do you respond when the punches are just on your gloves?”

Moloney's manager, Tony Tolj, also said he was surprised by the decision, but felt his fighter was deserving of the win.

“I thought it was a little bit of an early stoppage, but he [Naidjala] never threw anything back. And he [Moloney] was aggressive and landed everything with power. Just would like [to see Moloney fight] more rounds,” said Tolj.

The 33-year-old one-time WBO world title contender said to appeal the decision would be futile, and is now instead focused on getting his once-promising career back on track.

“Even if you appeal, they will not change the decision. It is theirs. They invited you, it is not like it was a mandatory fight,” said Naidjala.

“Everybody there knows he was not the better fighter. I'm not stressing. I'm not really worried about it. It's life. It's not the end of the world. I just need to pick myself up and go again.”