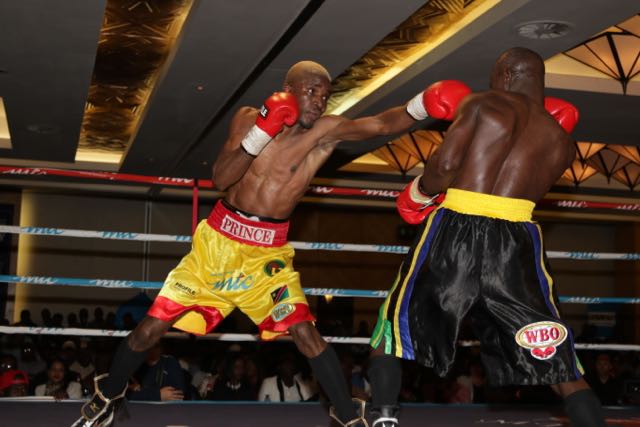 THE long-awaited IBF Intercontinental bantamweight title clash between Namibia's Immanuel 'Prince' Naidjala and Mzuvukile 'Old Bones' Magwaca of South Africa has finally been set to take place on 25 November.
The fight was originally scheduled for early October, but was postponed due to unforeseen circumstances. The fight will take place at the ICC Centre in Kimberley in the Northern Cape province.

This is a mega bout between Africa's bantamweight king and prince, and is set to be a mouth-watering affair and definitely a fight not to be missed by boxing fans, Naidjala's trainer and promoter Nestor Tobias said yesterday.

Magwaca (25) is the current IBF Intercontinental bantamweight champion as well as the WBF world champion. However, the only significant title Naidjala (32) is interested in is the IBF title.

Nicknamed 'Old Bones' for his wily boxing tactical nous, Magwaca is a tough opponent, with 19 wins and three draws in his 22 professional fights.

One-time world title contender Naidjala, 23-3-1, is looking to reignite his boxing career after losing his WBO Inter-continental title against another South African opponent in Sibiniso Gonya in April.

“I still have a lot of boxing left in me. I am focused and training hard. all thanks to my team. because a win in Kimberley is not negotiable,” said an upbeat Naidjala.

“We are glad that this fight will finally take place. This will definitely be a massive fight to watch between two talented bantamweight contenders, and a win for Naidjala is exactly what we have planned for,” added Tobias.