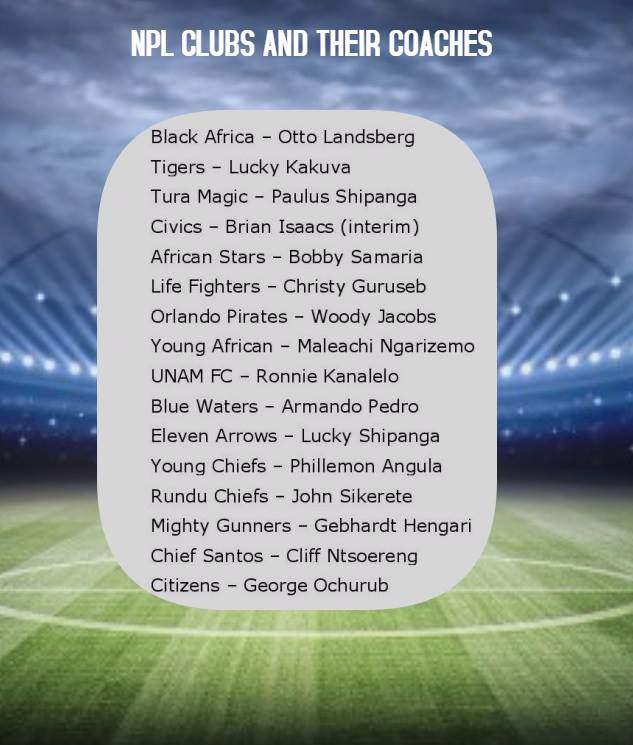 AFRICAN Stars began the new MTC Premiership emphatically with crushing victories over Orlando Pirates and top-flight returnees Life Fighters, while renegade league champions Tigers failed to show up for their matches.
Friday evening's routine 3-1 win against Pirates was followed by a 5-0 thumping of a hapless Fighters on Sunday to guarantee top spot ahead of Black Africa, Young African and Blue Waters, who were the only other sides to collect maximum points over the opening weekend of action.

BA beat Young Chiefs 1-0 on Saturday and Chief Santos 3-0 on Sunday in away matches to go second, while new boys African are third after seeing off Santos 2-0 and Young Chiefs 4-3 in a thriller on Sunday afternoon.

Coastal side Blue Waters had fruitful long trips to Mighty Gunners at Otjiwarongo and Rundu Chiefs at Rundu with 2-1 and 1-0 wins to occupy fourth spot.

Elsewhere on Sunday, Eleven Arrows beat Gunners 3-2 as Unam were awarded a 3-0 walkover win against Tigers who did not honour their weekend assignments as part of an ongoing boycott of the NPL.

Tigers, who also lost three points by the same margin to Citizens on Saturday, have not registered any players, and are said to be heading to court over their dispute with the NPL.

League administrator Tovey Hoebeb confirmed that Tigers forfeited points, and that the club still had time to register until 10 November.

Whether they will do so by the time the next two rounds come around next week remains a mystery as the club remains tight-lipped about their intentions.

Meanwhile, Stars stole the show when the Namibia Premier League finally resumed after an 18-month hiatus on Friday.

The traditional Katutura derby between Stars and Pirates launched the new season, and about 4 000 festive fans turned up at the Sam Nujoma Stadium to witness an exciting encounter.

Stars came out attacking, and after Ronald Ketjijere came close with an early effort, Panduleni Nekundi gave them the lead after only seven minutes with a great goal. From an Edwin Korukuve free-kick, Nekundi hit the crossbar with a powerful header, and then volleyed the rebound into the net to put Stars 1-0 ahead.

Riaan !Hanamub put in some strong runs down the left wing for Pirates, but Stars did most of the attacking, with Korukuve and Engelhardt Kahua providing good crosses into the box.

Marius Kotze put Stars 2-0 ahead with a stunning goal on 34 minutes. He went on a surging run through the central midfield, and unleashed a cracking 30-metre shot that hit the upright and bounced over the goal line.

Pirates pulled a goal back shortly after the restart when Stars' defence failed to clear a free kick, and Ronaldo Tsowaseb was first to react and head the loose ball into the net.

Stars, however, sealed their win in emphatic style with a great counter-attacking goal on 64 minutes.

!Hanamub put in a strong run for Pirates, but with no one in the box to meet the cross, Stars immediately launched a quick counter-attack which Philemon Nambele finished off.

It was a fine performance by Stars, who showed they will be strong title contenders this season.

In another entertaining match at the Sam Nujoma Stadium on Saturday, Unam and Tura Magic shared the spoils when playing out a 2-2 draw.

Muna Katupose gave Unam the lead on 29 minutes, heading in from a corner, but Papi Kavezembi equalised shortly before half-time with a volley from a Petrus Shitembi cross.

Tura Magic took the lead five minutes into the second half when they launched a quick counter-attack, and Keimuine finished the move off with a cracking shot from the edge of the box.

Five minutes later, though, it was all square again when Katupose scored his second goal.

Heini Isaacs started the attack and then passed to Ndemwaadha Shivute, who sent a perfect pass to Katupose in the box, and the latter smashed the ball into the net.

Both teams had more chances in a fast-flowing match, but they could not capitalise, and in the end had to settle for a draw.