MTC returns to football after patron (The President of Namibia) intervenes 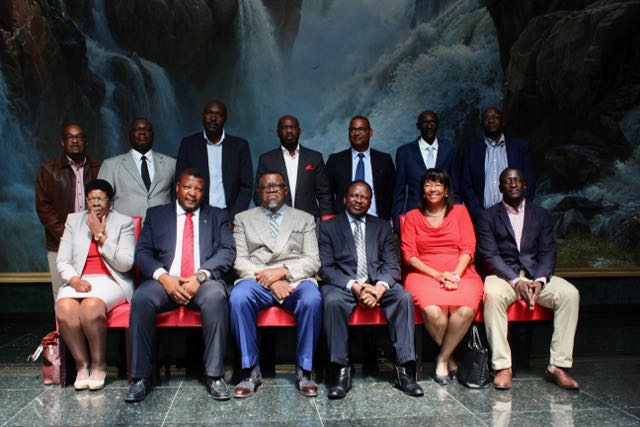 MTC and the Ohlthaver & List group have provisionally agreed to get the Namibia Premier League up and running again at the behest of Namibia Football Association patron, President Hage Geingob.
The 2016-17 NPL season is set to kick off on 12 May, with MTC returning as platinum sponsor, while O&L subsidiary Namibia Breweries Limited has also come on board. The nature and value of the NBL sponsorship has not been formalised yet.

Other sponsors expected to enter the fray are SAB Miller, Metropolitan/Momentum, Sanlam and Capricorn.

Since pulling the plug on the NPL last year, MTC has maintained that the football body needed to find auxiliary sponsors in order to guarantee a new deal.

Addressing football stakeholders at State House on Wednesday, Geingob dismissed the notion of “doing nothing” as patron and allowing football to come to a virtual standstill.

Football's woes are not a new phenomenon, and are a result of continued poor administration at federation level, he stated.

While Geingob has reservations about the country's sport administration, he reiterated that he would not interfere.

“The patron is not the one to run the day-to-day affairs of football. I am a little bit surprised that some of you expect the patron, let alone the head of state, to be running the activities of football,” he said.

“When did the football problems start so I can be accused of not doing anything? It is unfair to accuse me falsely. The problem is in administration. If you interfere in (football) administration as government, that is against Fifa rules. The country will be suspended from Fifa activities. It has happened to many other countries,” said Geingob.

Nonetheless, he engaged several potential sponsors in the past few months to “assist football” as they were struggling to attract investors.

He promised to attend one of the 2016-17 NPL opening match day fixtures.

“I realise that the children are suffering. I have been in touch with those who have been in football as sponsors, and they have tentatively indicated that they are willing to come back to football, provided that certain requirements are met,” the head of state said.

“They say the patron shows no interest in football. When you kick off, I'll be there to see you start with the new way of doing things.”

A substantive long-term solution to the perennial financial shortcomings will be found once the 'Remedial Sports Intervention Plan' is finalised, said Amos Shiyuka, who along with Elize Petersen makes up a task force recently assembled by the Sports Ministry at the request of Geingob to find investors for the country's resource-deprived sports industry.

“Sponsors will only come on board when we have proper administration and governance in place. Because if they give a million or whatever figure, they would want accountability for their investment,” Shiyuka said.

“We have a positive response from main sponsor MTC that says if and when the NPL interim committee has their house in order, MTC is willing to release the N$15 million for the league to kick off.

“We have confirmation from Namibia Breweries, through the O&L Group, that they are also ready to assist in the kick-off of the league, while we are finding proper remedies to fix the issue so that it does not happen again. There are other sponsors, but we will not name them now,” Shiyuka said.

Infighting and disharmony in the football leadership was a major cause for concern for investors, MTC chairperson Elvis Nashilongo said.

“At the moment, we are seeing improvements in those aspects. Football is a game that can promote our brand. It is very unfortunate that you find the leadership of football dragging the name of a reputable institution like MTC through the mud, instead of coming to the table and discussing the pertinent issue of football,” he added.

The chaos forced former NPL chairman Johnny Doëseb from office last month, while a number of leading clubs are said to be plotting a boycott of the Debmarine Namibia Cup, unless it runs concurrently with the proposed new league schedule.

“We are new brooms. We are trying to arrest all the governance issues and see that we put things right,” said NPL interim management committee chairman Franco Cosmos.