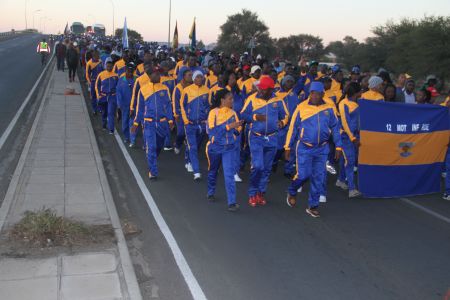 The sixth edition of the Namibian Defence Force (NDF) annual sports tournament kicked off at Keetmanshoop on Monday.
This years sports edition is scheduled for 05 to 10 August and is being hosted by the 12 Motorised Infantry Brigade (Mot Inf Bde) based at Kaptein Hendrik Witbooi barracks, Keetmanshoop.
Speaking to Nampa here on Monday, 12 Bde sports vice chairperson of the management committee, Lieutenant Colonel Samora Njambari said the tournament includes sport codes such as soccer, volleyball, netball, boxing, pool table and field and track.
Dressed in their different sport attires, the NDF members marched from the local fire brigade to the Westdene Stadium while carrying different flags representing the Namibian Army, Air Force, Navy and Defence Headquarters amongst others to mark the commencement of the games.
The march is aimed at creating awareness to the members of the public to know that we are here from all over the country to present them with a busy but entertaining week filled with sport activities, Njambari said.
The official opening of the tournament will take place on Tuesday and will be officiated by Acting Chief of Defence, Air Vice Marshal Martin Pinehas.
The tournament is sponsored by the Defence Force Foundation to the amount of N.dollars 139 000.
It was hosted by 21 Bde in Windhoek in 2018 and the overall winner was 26 Bde from Grootfontein.
(NAMPA)
PT/EK/PS