Petrus Shitembi in action for Namibia in the Cosafa Cup. 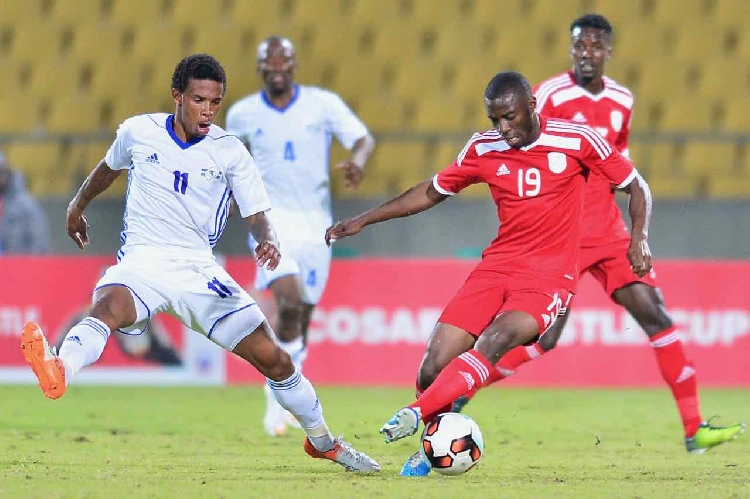 THE Brave Warriors could be lining up against the People's Republic of China's Dragons in the near future after the Namibia Football Association accepted a proposal from their counterparts for a friendly international.

NFA secretary general Barry Rukoro on Thursday confirmed what would be a milestone first-ever senior international, whose date and venue still need to be set, against opposition from outside Africa.

Playing unofficial matches against the Westphalia development sides from Germany is the closest the Brave Warriors have come to facing an overseas national team at home.

“Yes, we have been approached in that regard, and have confirmed interest to participate. But we are still waiting for the third party to give us the concrete situation from the Chinese FA,” Rukoro told The Namibian Sport.

In their acceptance letter authored by Rukoro, the NFA expressed immense gratitude and interest in fostering football relations between the countries.

“We are aware that Namibia and China enjoy good trading relationships, and for this we are expressing our gratitude for the opportunity that has arisen between the two countries to maximise that friendship,” he stated.

Following changes to the 2019 African Cup of Nations' qualifying fixtures, the Brave Warriors have no international matches until June when they contest the Cosafa Cup.

Namibia were due to play Zambia in a Group K qualifier in March, but that match has been postponed to September, with the return encounter and home match against Mozambique on match-day three and four moved to between 8 and 16 October.

“Against this background, we would like to confirm the date from the China Football Association so that we can start to explore the necessary arrangements for the match.

“We are comfortable to play the match on a Fifa international match day as indicated from the communication from the Embassy of the People's Republic of China,” stated Rukoro.

Ranked 68th in the world by Fifa, China is aiming to become a football powerhouse by 2050, with plans to get 50 million children and adults playing the game by 2020, according to a 2016 report by BBC.com, which chronicled the ambitious football project of the world's most populous nation.

President Xi Jinping is a football enthusiast, and wants China to win the World Cup in 15 years.

While China excels at the Olympics and Paralympics, it has only ever qualified for one football World Cup, in 2002.