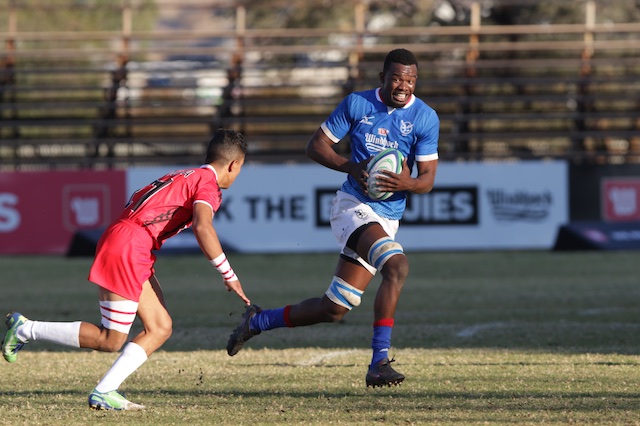 NAMIBIA have taken a commanding lead in the Africa Gold Cup campaign and are now the hot favourites to qualify for next year's Rugby World Cup.

With the winners of the Gold Cup qualifying automatically for the World Cup, Namibia are now well on track after opening their campaign with three impressive bonus point victories against Uganda, Tunisia and Morocco.

They beat Uganda 55-6 and Morocco 63-7, while they posted a new record score of 118-0 against Tunisia to top the log on 15 points from three matches.

They have played some dazzling attacking rugby, with backs and forwards combining superbly to score a wide array of thrilling tries. They scored 18 tries alone against Tunisia and another 18 in the other two matches for an impressive total of 36 tries in three matches.

Flanker Janco Venter is the leading try scorer amongst the forwards with three tries, while captain Johan Deysel, Wian Conradie, PJ van Lill and Justin Newman have all scored two tries each.

Fly half Cliven Loubser has also been very successful with the boot and leads the individual points scorers list with 52 points at an average of 17 per match.

After the first three rounds, Namibia are now well ahead on the log, but Kenya and even Zimbabwe still have a mathematical chance of catching them.

Kenya, who won their opening two matches after beating Morocco 28-24 and Zimbabwe 45-36, failed to collect a bonus point in either, and are now second on eight points from two matches.

If, however, they beat Uganda in Nairobi on Saturday, they will reduce the gap on Namibia and will be right back in contention.

They will start as the strong favourites against Uganda and if they can win with a bonus point, they will move up to 13 points - only two behind Namibia.

Kenya already beat Uganda 34-16 in their annual Elgon Cup competition on 26 May, while they haven't lost at home to Uganda since 2013.

Even Zimbabwe, who have had a poor start to their campaign, still have a mathematical chance of winning the group but the chances of that are minimal.

They were surprisingly held to a 23-23 draw by Morocco in Harare on 16 July, before losing 45-36 to Kenya last weekend and are now on two points from two matches.

For them to come back into contention, they would have to win their remaining three matches with bonus points and hope that Namibia lose all their matches, which is highly unlikely.

Zimbabwe will hope to get their campaign back on track with a victory against Tunisia in Tunis on Saturday, but their preparations suffered a setback when their players had to sleep on the streets on Monday night following problems with their accommodation in Tunisia.

Rugby Africa and the Tunisia Rugby Union apologised for the embarrassing situation the next day, saying that they had addressed the situation immediately and had found an acceptable solution.

“I apologise on behalf of Tunisia Rugby Union, we pride ourselves in hosting Rugby Africa tournaments every year and make every effort to meet the best international standards in terms of accommodation and other infrastructure. Something went wrong for which I am sorry, but this was corrected this morning in consultation with the Sables management team. I can assure you that there was absolutely no intention to destabilise our opponents and we will make every possible effort to ensure they have a good preparation ahead of Saturday's match.”