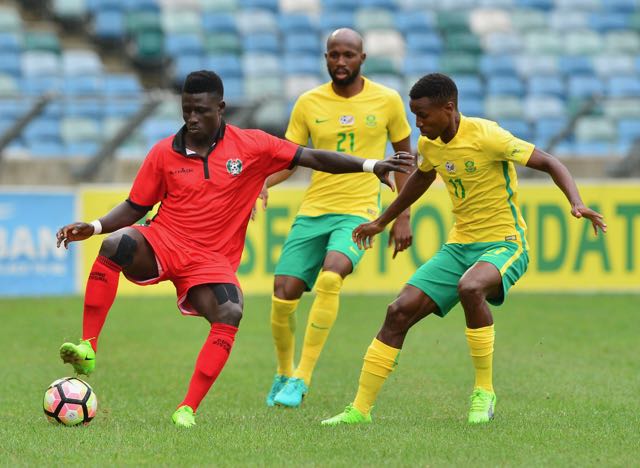 JOHANNESBURG - South Africa stretched an unbeaten run to a record 16 matches Saturday with a 3-1 friendly international victory over Guinea-Bissau in Durban.
Kermit Erasmus and Andile Jali converted penalties and Percy Tau scored on debut for Bafana Bafana ("The Boys") at a wet and windy Moses Mabhida Stadium.

Djalo "Aldair" Balde scored for Guinea-Bissau, whose qualification for the 2017 Africa Cup of Nations ranks among the greatest shocks in the 60-year competition.

The South African unbeaten streak began in October 2015 with a victory in Angola and includes nine victories and seven draws and a 31-14 goal tally.

Between 1994 and 1996, South Africa went unbeaten in 15 matches before losing a Cup of Nations group game to Egypt in Soweto.

Erasmus scored on 36 minutes and Tau on 69 minutes before "Aldair" set up a tense finish by halving the deficit 12 minutes from time.

Substitute Jali netted a minute from time to put beyond doubt the outcome of the first meeting between South Africa and Guinea-Bissau.

The west African "Wild Dogs", who held hosts Gabon and lost narrowly to eventual champions Cameroon in their Cup of Nations debut, rarely play friendlies due to scarce financial resources.