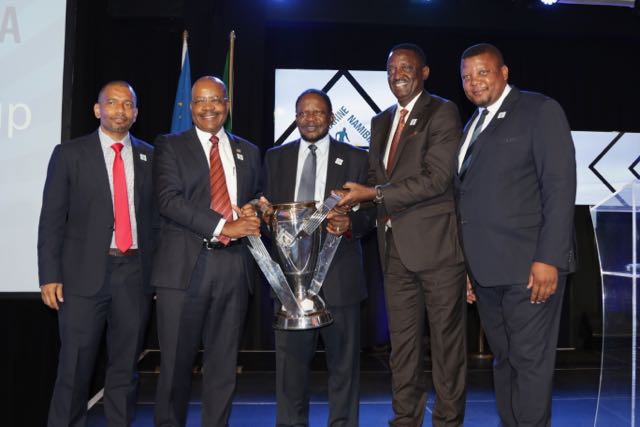 KATUTURA giants African Stars and Life Fighters of Otjiwarongo will meet in the stand-out match of the Debmarine Namibia Cup Round of 32 after the draw was made in Windhoek on Thursday.
Life Fighters, who were promoted to the Namibia Premier League last year, have a rich history and traditional ties with Stars, and a big turnout can be expected when they meet towards the end of April.

The Round of 32 matches will be played over two weekends at different venues, with the fixtures still to be finalised.

The regional winners of the Debmarine Namibia Cup joined the 16 Namibia Premier League teams in the draw of the lucrative competition which will see the winners walking away with a total of N$590 000.

There are only three matches involving all-Premier League clubs, with the other two being Mighty Gunners versus Citizens, and Blue Waters versus Rundu Chiefs.

At Thursday's launch, the senior financial manager of Debmarine Namibia, Willy Mertens gave the breakdown of their sponsorship for the tournament, which amounts to N$4,7 million per year or N$14,1 million for a three year-period.

Besides that, the various regions and zonal streams associations received a total of N$570 000 in assistance, as well as N$680 000 in prize monies.

Mehrtens said Debmarine Namibia was delighted to sponsor the competition and that they could assist the government in achieving their development goals.

“One of the key principles of our government is 'partnerships', which is recognized as a major prerequisite for the achievement of dynamic, efficient and sustainable development. This involves, for example, partnerships between government, communities and the private sector and today we celebrate such a partnership,” he said, adding, that the government could consider a tax write-off for these kinds of sponsorships to encourage the private sector.

The Minister of Sport, Youth and National Service, Jerry Ekandjo commended Debmarine Namibia for their sponsorship, saying that sport was a catalyst for social cohesion.

“This is very important at this time and hour, particularly because we as a nation are going through some divisional challenges, and competition of this nature can only help us find unity amongst ourselves,” he said.

Ekandjo also expressed the hope that Namibia's football leagues would soon be in full swing, with the support from other corporates and stakeholders in Namibia.

The complete Draw of 32 is as follows: