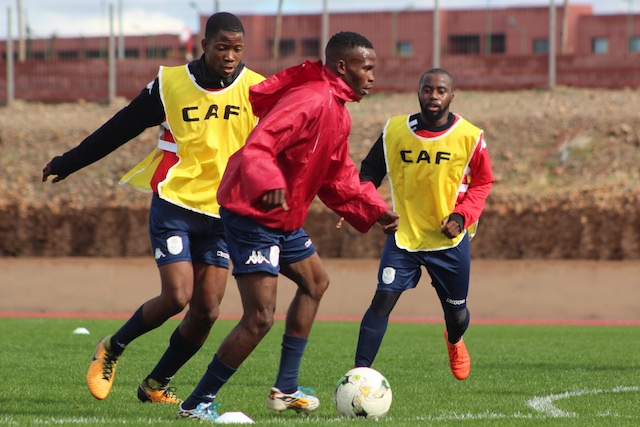 MARRAKECH - Brave Warriors head coach Ricardo Mannetti warned his charges against complacency in the aftermath of their historic 1-0 win over Ivory Coast at the 2018 African Nations Championship at the Stade Marrakech in Morocco on Sunday.

The shock result, coupled with Zambia's 3-1 win over Uganda, leaves Namibia second in Group B after the opening round of matches.

Despite his side's impressive showing against one of the continent's football powerhouses, Mannetti said the Brave Warriors are still “underdogs” and will have to be at their best to thwart Uganda and Zambia in their remaining group matches.

“We can't relax and think we've made it just because we beat Ivory Coast. We are still the underdogs trying to get out of a tough group,” Mannetti told The Namibian Sport.

Man of the match Charles Hambira netted the game's only goal in second-half stoppage time as Namibia caught the highly fancied Elephants, who were third at the Chan in Rwanda two years ago, cold.

The 92nd minute winner was Brave Warriors' first at a senior continental competition for men and a first over Ivory Coast in competitive action.

“This was hurdle number one, we've handled it properly and got a result. Uganda play differently from Ivory Coast, so our approach will also have to change,” he said.

The win over pre-tournament favourites Ivory Coast has made the Chan debutants the team to beat in Group B and inflated expectations back home.

“A victory against Ivory Coast gives Namibian people hope in our football. It has shocked a lot of people back home,” Mannetti said.

“Normally, we are not known to be tactically well organised. We are not known to get a result at big competitions like this one, so it has made people feel that there is hope for the future with the Afcon qualifiers coming up,” he continued.

“It will be very tough for these players after this tournament because the expectations will be very high from the Namibian people who will expect nothing less than good tactical performance and how we approach games.”

Ivory Coast had most of the ball throughout the entertaining contest registered only one shot on target whereas Namibia had five and should have been 2-0 up by halftime had it not been for poor finishing.

“When you play against a team like Ivory Coast in your first match, you need to respect football. With respect, I don't mean that is is fear,” said Mannetti.

“We are of the opinion that you can also control the game without having the ball. We at times where in control of the game without the ball and that was important, so it should not be interpreted as fear because we also got chances playing in that manner.”

Having kept the Elephants attackers at bay for 90 minutes, Hambira rose highest to delicately flick in a header from a in-swinging Riaan Hananub delivery to hand Namibia a deserved victory.

“I did not think I would score today but it happened and I'm very happy about our victory,” said a beaming Hambira.

Mannetti trusts that his charges will remain focused on the job at hand once the euphoria from the opening match subsides.

“I'll let the boys have their moment in the sun. They deserve it. With that said, she objective remains the same. We want to get out of the group and we have made the right start. So, we have to start afresh for the second match and not think about what happened against Ivory Coast,” he said.

Namibia next play Uganda on Thursday at the same venue, with Zambia taking on Ivory Coast, whose coach Ibrahima Kamara lamented the loss to the Brave Warriors.

“We made a bad start. We have to pick ourselves up, work hard and go again. We played against a very good opponent. Congratulations to them. Things did not go according to plan but we still have two matches to try to improve,” said Kamara.