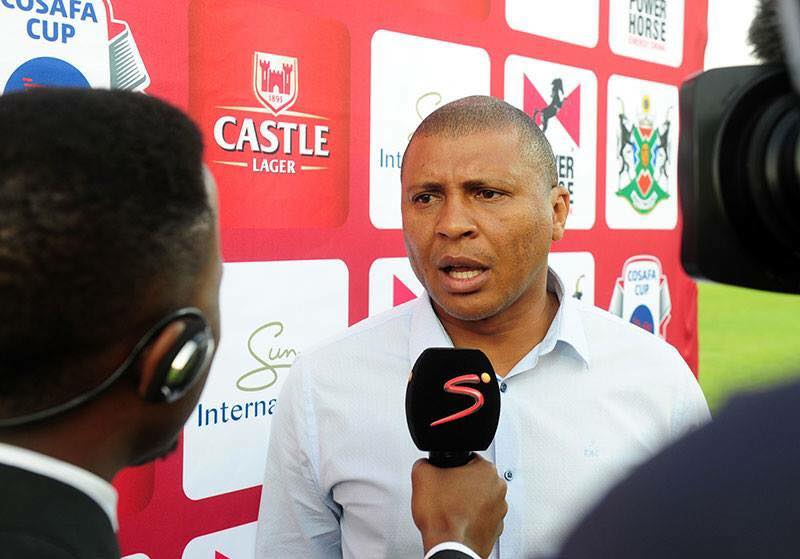 This year?s Council of Southern Africa Football Associations (Cosafa) Cup underway in South Africa provides Namibia with an opportunity to rewrite history, Brave Warriors coach Ricardo Mannetti has said.
Speaking during a media conference here on Tuesday where he announced the 22-man squad to take part in the tournament, Mannetti said every player needs to go the extra mile in order for the team to win the trophy.
Namibia won the cup in 2015.
His biggest concern is the players? match fitness.
?We have so many factors against us like the financial issues and inactivity of the league,? he said.
The coach added that for now, his charges are focused on the Lesotho match on Saturday as that will determine the road ahead.
?Combination play will be important?we have a strategy for Lesotho,? Mannetti said, adding Namibia is well aware of Lesotho?s strengths and weaknesses, which makes him confident of a positive outcome.
?We have played them before and we know they have roped in some under-20 players,? he said.
He noted that he has watched Lesotho in the past two Cosafa tournaments and recently watched them against Tanzania, where they drew one-all, so ?they are not a closed book?.
Mannetti called on Namibians to look past the problems local football faces and focus on the prize instead.
The coach said as much as the team is under pressure, they still have the ability to produce good results as long as they have the support of the nation.
He said as a technical team they worked on the mental strength of the team because players are currently not in a stable environment, having lost their only source of income.
Mannetti further noted that he already has an idea of who his starting 11 will be based on the tactics for the day and their performance during training.
There are no major injuries within the squad, except Peter Shalulile?s recurrent ankle injury and Petrus Shitembi?s knee problem.
The players are:
Virgil Vries, Maximillian Mbaeva, Loydt Kazapua, Chris Katjiukua, Ferdinard Karongee, Ananias Gebhardt, Larry Horaeb, Denzil Haoseb, Riaan !Hanamub, Tiberius Lombard, Oswaldo Xamseb, Dynamo Fredericks, Wangu Babtista Gome, Petrus Shitembi, Absalom Iimbondi, Hendrik Somaeb, Benyamen Nenkavu, Ronald Katjijere, Deon Hoto, Peter Shalulile, Rodger Katjiteo and Itamunua Keimuine.