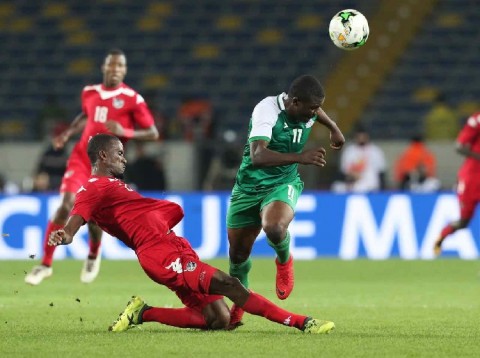 TWO inspired displays for the Brave Warriors at the 2018 African Nations Championship prompted Zambian Premier League side Lusaka Dynamos to sign central defender Teberius Lombard for an undisclosed fee on a three-year deal.

The Lusaka-based team was particularly impressed by the Tura Magic player's man of the match performance against Zambia's Chipolopolo in a Group B clash, which ended 1-1 in Casablanca last week.

Lombard followed that up with another solid display against Morocco on Saturday after coming on at half-time for jittery Ferdinand Karongee.

Namibia went on to lose the quarter-final match 2-0, but the 28 year-old 'Ace' had done enough to earn his first professional move abroad.

“We have just learned, with great excitement, that our central defender, Teberius Lombard, has successfully negotiated a three-year deal with Lusaka Dynamos, which competes in the Zambian Premier League,” club chairman Peter Nakurua said in a statement on Thursday.

“He will feature for the club as soon as his new club secures his ITC [International Transfer Certificate] from the Namibia Football Association.

“The player will be back in the country at the weekend before he returns to Lusaka to start his professional football career with Lusaka Dynamos.”

While his starring role in Morocco secured the move, The Namibian Sport understands that the Zambian club had been tracking Lombard even before the Chan tournament.

“They have been eyeing him for some time. They went to Chan to check him out, and invited him to Lusaka to sign the contract,” a club source said.

The financial details are yet to be made public, but the source said Lombard has been offered a significantly better package than what he was getting at the Magicians.

Lombard joined Tura Magic during the 2008-09 season when the club was still playing in the Khomas Region's Second Division.

He was loaned out to Orlando Pirates the following season, where he got a first taste of top-flight action, before returning to help Magic win promotion to the Namibia Premier League in the 2010-11 campaign.

With 10 Brave Warriors caps under his belt, Lombard has been a mainstay at the club since, making over 100 appearances.

He leaves for an ambitious club that is traditionally renowned for nurturing fledgling talent, but which has changed philosophy in recent times in a bid to compete for honours.

Winning the Zambian Challenge Cup in 2008 represents Lusaka Dynamos' finest hour to date. Their best finish to the league championship was sixth in 2007.