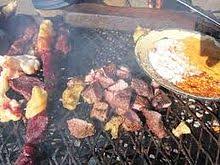 The popular meat and ‘kapana’ (grilled meat) business at the Adolf informal settlement in the Oshana Region’s Ondangwa Rural Constituency is a health hazard as vendors slaughter cattle there in unhygienic circumstances.
The cattle are slaughtered under several trees and animal waste disposed of all over the area, especially in the nearby water pan.
Although not yet proclaimed a settlement, Adolf has fast grown into both a business and residential centre.
During a clean-up here on Saturday, vendors were called upon to pull their resources together to establish an appropriate slaughterhouse.
“We initiated this massive cleaning campaign after realising the fast business growth here has resulted in enormous random garbage dumping,” said Onelago United Football Club (FC) Chairperson, Herman Paulus said while club members cleaned the settlement.
Established in 2002, Onelago United FC was part of the Oshana Village-based Football League at Omaala village before joining the Oshana Region’s Second Division League of the Namibia Football Association in 2010.
Most of its players are from within the Adolf settlement area, hence their decision to be part of the drive to clean up the settlement and ensure proper waste management in the area.
Local councillor Abraham Kaushiweni told Nampa on enquiry Saturday the pan forms part of other water streams in which floodwater flows to other parts in the south of the region during the rainy season.
“This means people in the neighbouring constituencies such as Okatyali and Uukuyuushona will receive dirty water flowing from here,” he stated.
Kaushiweni pointed out that suggestions were made to the local traditional authority to avail land where a dump site for the settlement can be created.
“This will help us to properly manage and control garbage from this fast-growing community centre in future,” he said.
Approached for comment, Headman Paulus Mutikisha of Ekolanaambo No.2 revealed that the Oukwanyama Traditional Authority agreed to the establishment of the dump site, but said the traditional authority finds it difficult to acquire suitable land.
“The villagers who own the suitable land we have found, have declined to give us that land,” Mutikisha said.
He promised that the traditional authority leaders will continue searching for land suited for the creation of a dump site.
(NAMPA)