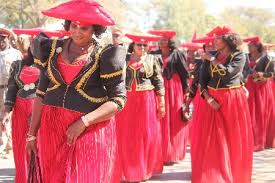 Confusion surrounds the venue for the annual Red Flag commemoration slated for this weekend, with only two days left to the event.
General Field Marshal of the Red Flag Regiment, Ismael Kamuhapita told Nampa on Tuesday the commemoration will be held at Plot No. 1756 in Nau-Aib, Okahandja.
This plot, according to the Mayor of Okahandja Congo Hindjou, was leased to the Red Flag Regiment in 2010 for a period of two decades.
However, head of the OtjikaTjamuaha Royal House Tjinaani Maharero said the gathering will be on Plot No.1755, which at the moment belongs to the Ovaherero Traditional Authority (OTA).
According to Maharero, a court order issued in 2014 states that the 'holy fire', which signifies hope and a site of communication with the ancestors, should be restored east of the corrugated iron structure at this plot.
He said the order had never been challenged, which makes it still valid.
This structure was however removed from this plot after the OTA bought the area and has now been re-constructed at Plot No. 1756, which is adjacent to 1755.
“We stand by the court order and will be gathered at Plot No. 1755 as ordered by the court,” Maharero told Nampa.
Not only is the interest in holding the commemoration at this plot driven by the court order, but Maharero further explained that this plot and the removed house were of sentimental value to the OtjikaTjamuaha clan, and entire Ovaherero community.
He told this agency that when the remains of Samuel Maharero were brought from Botswana for reburial in Okahandja, it was done from this plot in the corrugated iron structure that was removed.
This structure according to Maharero belonged to Tjihimangongo Maharero, a sister to Samuel Maharero.
He also said all the late chiefs of the Ovaherero community buried in Okahandja had their funerals at this plot and in the very structure that was demolished.
Asked on the significance of the holy fire, the chief explained that the fire signifies blessings and good luck and the site is a place of communication with the ancestors.
“Like they light a torch during our independence celebrations it is customary for us to light the holy fire a few days before the commemoration,” he explained.
The Red Flag Day also marks the remembrance of the life of Samuel Maharero and the great struggle against German troops.
The day was introduced by the late Chief Hosea Katjikururume Kutako after the return of the remains of Samuel Maharero on 23 August 1923.
Contacted for comment, spokesperson of the OTA Bob Vezera Kandetu denied receiving any communication from the Maherero clan with regard to holding this year’s commemoration on plot 1755.
(NAMPA)