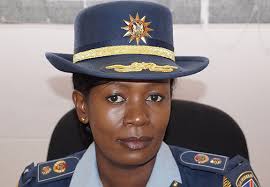 A 19-year-old girl allegedly killed her 25-year-old boyfriend by stabbing him with a knife in a fight, in which she was also stabbed, involving at least one other person on Friday in Windhoek.
Spokesperson of the Namibian Police Force, Chief Inspector Kauna Shikwambi confirmed the incident to Nampa on Saturday, saying it happened around 21h00 at the corner of Ongava and Ombakata streets in Okuryangava.
It is alleged that an argument erupted between the duo leading to the man assaulting his teenage girlfriend.
Though details are sketchy as to how many people were on the scene, the angry man in the process reportedly also damaged a car belonging to a friend of his.
“The suspect allegedly fatally stabbed the deceased on the left side of the neck, killing him instantly,” said Shikwambi.
The girl was apparently also stabbed twice in the head by a suspect said to be at large, and taken to hospital for medical assistance.
Shikwambi said her condition was reported as stable and she was arrested.
Police investigations in the matter continue.
(NAMPA)