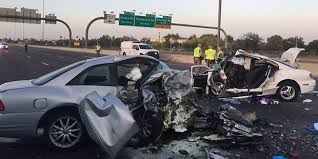 The Motor-Vehicle Accident (MVA) Fund has recorded 52 crashes in which two people died and 97 people suffered varying degrees of injuries between Wednesday and Sunday.
The two deaths were recorded in the Kunene and Oshana regions.
In a statement issued on Wednesday, the MVA said road crashes have increased but less people have died.
“The commencement of the 2017/18 Festive Season Road Safety Campaign indicates an increase in crashes (21 per cent) and injuries (29 per cent), while the number of fatalities have significantly reduced by 67 per cent between 22 and 26 November 2017 as compared to the same period in 2016,” read the statement.
It said factors such as driver fatigue, inattentiveness, inappropriate driver behaviour, driving under the influence of alcohol, and exceeding prescribed speed limits contribute to the occurrence of these types of crashes.
Most crashes were recorded in Khomas (26), followed by Erongo (9) and Otjozondjupa (5) regions, with Oshikoto, Kunene and Hardap recording one each.
The MVA emphasised the importance of driver fitness, vehicle fitness and passenger safety during the festive season.
(NAMPA)